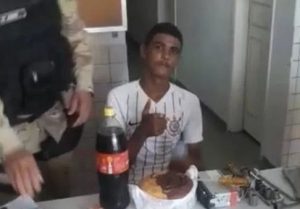 You can call this the kindest arrest of all times. This young may have to thank his stars for getting arrested on his birthday though he found the birthday a little humiliating as it was filmed for the entire world to see.

A Brazilian young man recently got a rather humiliating birthday party thrown for him by police after being arrested for theft right on the day that he turned 18.

For Paulo Rodrigo das Neves, from Brazil’s Rio Grande do Norte region, celebrating his 18th birthday was not entirely pleasant as he did it before officer waiting to throw him in jail.

He was arrested on his birthday after being caught on camera stealing sound equipment and other parts from people’s cars.

The birthday boy got to enjoy a humiliating celebration at the police station, with staff there singing him “Happy Birthday” and even serving cake and soda in his honor. To make matters worse, the whole thing was filmed and posted online.

“We can’t pass up a date like this,” the police officer filming can be heard ironically saying, as two of his colleagues at the 5th Civil Police Precinct of Macau help set the table for the birthday boy. Paulo Rodrigo das Neves doesn’t seem to be happy with the situation, probably because he was spending his 18th birthday in police custody, and the officers were making fun of him throughout the event.

The police involved in the celebration eventually sing Happy Birthday for Paulo, pour Coca Cola, and even have him cut a cake they bought for him ,and serve the second slice to his mother, who is watching the humiliating scene unfold.

After the video of the bizarre celebration went viral on social networks, Brazil’s Military Police issued a statement informing the public that it would conduct an investigation, and threatened disciplinary action against the police staff who participated in the shameful display.

According to several comments on social media, the police were actually celebrating the fact that Paulo Rodrigo das Neves would have to answer for his crimes as an adult, and potentially spending times behind bars, which only makes the whole thing sound even crueler.

Saxon is a prolific writer with passion for the unusual. I believe the bizarre world is always exciting so keeping you up to date with such stories is my pleasure
Previous Police Arrest Entire Fast Food Restaurant Staff After Being Denied Free Burger
Next Japanese Company Offers Service Where You Can Rent Fat People for $18 an Hour (Video)