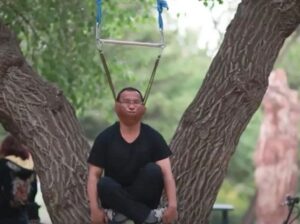 This might be a bit extreme but it seems to be working for these senior citizens.

Pensioners in China are increasingly turning to the idea of hanging by the neck as a form of exercise to treat back pain.

A bizarre exercising trend has become very popular among elderly fitness enthusiasts in China’s Liaoning Province over the last couple of years. Photos and videos show pensioners hanging by the neck on a special harness and either dangling in the air or swinging their bodies back and forth, and in a circular pattern. They attach these special neck hanging harnesses to trees in parks, or to metal bars at outdoor exercising venues, and they swear that the unusual exercises do wonders for their back problems.

“The routine has healed my spinal issues. I don’t have to take medication anymore,” an elderly woman who hangs by the neck every day for at least 30 minutes, told Pear Video. “I can even take a nap on it. It’s so comfortable.”

The neck swings used for the bizarre exercises were invented by Shenyang native Sun Rongchun, who started using the swing around 2017, as a way to relieve neck pain. He was so happy with the results that he started recommending them to other people, so you could say that the 57-year-old started this controversial fitness trend.

Hanging by the neck is supposed to help by stretching the vertebrae of the cervical spine and neck, reducing pressure on the nerves, but experts warn that these claims are not scientifically proven and that the exercises could cause serious spine injuries, even paralysis.

The human neck can only safely handle a weight of 25 kilograms, so having it support several times that weight for prolonged periods of time, while moving your body in different directions is just not the safest exercise in the world. Still, its practitioners continue to swear by it.

The unusual form of exercise first made international news headlines in 2019, but it has continued to grow since then, and videos of people dangling in the air suspended by their necks continue to go viral online.

Saxon is a prolific writer with passion for the unusual. I believe the bizarre world is always exciting so keeping you up to date with such stories is my pleasure
Previous Stunned Man Sees His Wife On Social Media Wedding Another Man
Next The Internet Found A Donald Trump Lookalike In Pakistan (Viral Video)