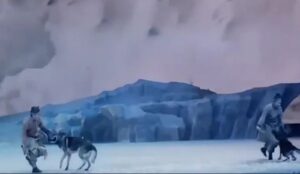 A video of wolves chasing actors across the stage during a live-action show in China has raised concerns about whether adequate safety and security measures are taken during such performances. The wolves were part of a show titled ‘Tuoling Legend’ or ‘The Legend of Camel Bell’, which tells the history of the Silk Road. According to the website of Huaxia Cultural Tourism, the company that conducted the performance, wolves feature in one of seven scenes in the performance. The show also features camels.

Footage of a recent performance of the show has gone viral on social media for all the wrong reasons. It shows the wolves, who don’t appear to be wearing leashes or harnesses, rushing onstage, chasing actors and even jumping into the aisles between audience seats. Members of the audience can be heard screaming as the animals continue their rampage and, at one point, even pin down an actor.

According to CNN, the incident took place in a theater in the northwestern city of Xi’an. Footage of the wolves chasing the actors has gone massively viral on Chinese social media website Weibo, racking up more than 433 million views.

The footage has sent alarm bells ringing on social media, where many criticised the organisers for not taking adequate protective measures.

A representative of the Xi’an branch of Huaxia Cultural Tourism said the wolves were trained and would not have hurt anyone.

“The wolves have been domesticated for three to four generations,” the representative said. “They are legally raised and trained by professional trainers with certifications since 2018 and no accident happened in the past three years.”

1 Comments Local news channels also reported staff of Huaxia Cultural Tourism saying that the performance of the show had not been affected by the viral video. ‘The Legend of Camel Bell’ features cameo appearance from 20 camels and 30 gray wolves.

Saxon is a prolific writer with passion for the unusual. I believe the bizarre world is always exciting so keeping you up to date with such stories is my pleasure
Previous Watch: Mother Hen Battles A Snake To Protect Her Chicks
Next World’s Most Premature Baby Celebrates First Birthday. He Was Given 0% Survival Chance