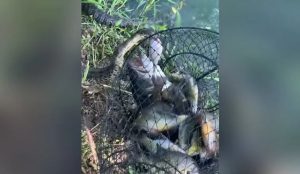 Mr Searcy had a fishing basket in water when the snake appeared. Footage of the incident shows the snake gliding straight for the basket and disappearing underwater. “It kept going underwater so I pulled out my phone and pulled in the basket,” said Mr Searcy. Then, as he filmed the scene while pulling the basket in, the snake made a reappearance.

The shocking video, shared by licensor ViralHog, shows the serpent thrashing furiously in an attempt to steal the fish inside the basket.

The video has been viewed over 13,000 times on YouTube since being shared two days ago.

According to the Illinois Department of Natural Resources, the state is home to about 40 species of snakes that dwell in forests, grasslands, marshes, swamps, ponds, lakes, streams, rivers and sloughs. Only four species of snakes found in Illinois are venomous.

Saxon is a prolific writer with passion for the unusual. I believe the bizarre world is always exciting so keeping you up to date with such stories is my pleasure
Previous World’s Most Premature Baby Celebrates First Birthday. He Was Given 0% Survival Chance
Next BIOMILQ Becomes First Company to Manufacture Create Breast Milk Without Breast (Video)