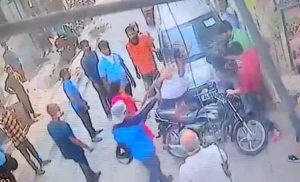 A biker and his co-rider were assaulted in Delhi’s Palam area allegedly after their motorcycle brushed against a scooter.

The road rage incident took place on the afternoon of June 18 and was captured by a CCTV camera in the locality. The biker suffered head injuries after the accused allegedly hit him on the head with a rod.

Police have registered a case of assault in this connection. The biker’s family has criticised the police action, saying that his injuries are serious and the case should have been filed under the attempt to murder charge.

The CCTV footage shows two men, one of them carrying a stick, charging at a man holding a helmet in his hand. While one of them punches him, the other hits him with the stick. A woman is seen trying to stop them. At this point, another man comes running and starts raining blows on him. The man’s companion is also beaten up and his head banged against the bonnet of a car parked there. The man with the stick charges again and hits the biker.

The footage shows the biker bleeding from his head after the accused stop assaulting him.

In another video shot by the biker, two men who allegedly beat him up and the woman who was seen trying to stop the assault are seen. The biker identifies the woman as the mother of one of the men who allegedly assaulted him. He then switches to the front camera and is seen bleeding from the head.

Saxon is a prolific writer with passion for the unusual. I believe the bizarre world is always exciting so keeping you up to date with such stories is my pleasure
Previous Rescuers Save ‘Drowning Woman’ Only To Discover It Was A Sex Doll
Next Caught On Camera: TV Anchor Interrupts Live Bulletin To Claim He Hasn’t Been Paid