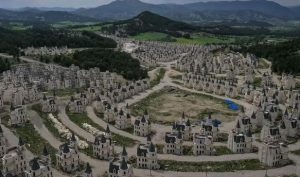 Burj Al Babas is an abandoned housing development in Turkey, which consists of hundreds of miniature Disney-like chateaus stretching out almost as far as the eye can see.

It was supposed to be a bustling holiday retreat for the world’s super-rich, a neighborhood of castle-inspired villas spread around in a picturesque valley, near the the historic village of Mudurnu, in northwestern Turkey. Instead, today Burj Al Babas is one of the world’s largest ghost towns, featuring hundreds of unfinished villas, some of which have already started to deteriorate. It’s a story of big ambitions, sky-high property prices and economic woes that ultimately spelled the end of the dream that was Burj Al Babas.

Turkey’s unique chateau village was the brainchild of the Yerdelen brothers, who ran construction company Sarot Property Group. Their goal was to attract wealthy buyers from the Middle East, many of whom loved holidaying in Turkey, because of its Mediterranean climate and beautiful landscape, and they priced the villas accordingly.

Initially, the Disney-like chateaus sold for $400,000 to $500,000 each, and the Yerdelens actually managed to sell about half of the more than 700 residences, before things started going downhill. First, oil prices plummeted, which affected target buyers, and then a series of events sent the Turkish economy into a downward spiral that it has yet to recover from.

The project was ambitious to say the least. Built in an area famous for its hot springs, each villa in Burj Al Babas was to feature under-floor heating and Jacuzzis on every level, as well as the option of having an indoor pool. A shopping mall inspired by the US Capitol was to serve the entire complex, and lush gardens and ponds were planned to create a truly fairytale landscape.

Construction began on 2014, and with a workforce of over 2,500 people on location near Mudurnu, things moved pretty fast. But then sales dried up, the Turkish lira collapsed, Sarot couldn’t honor its loans and construction halted. By 2019, Burj Al Arab was less than halfway to completion, and things haven’t progressed much since.

None of the 530 villas built so far – none of which have been completed – are inhabited, and instead of a bustling holiday retreat for rich Gulf businessmen, Burj Al Babas is now an eerie attraction for tourists interested in ghost towns.

Even though it’s far from completed, Burj Al Babas already cost its developers $200 million to build thus far, and they aren’t yet ready to throw in the towel. Despite filing for bankruptcy, Sarot Property Group hopes to eventually deliver the paradise it once promised its wealthy clients. The Turkish Government has also been very supportive of the project, but things aren’t looking good right now.

Saxon is a prolific writer with passion for the unusual. I believe the bizarre world is always exciting so keeping you up to date with such stories is my pleasure
Previous How Birthday Cake Helped Madhya Pradesh Brothers Escape Leopard
Next Boy Attempts To Scare Away Grasshopper. Watch What Happens Next