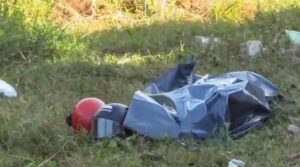 A pensioner has had a lucky escape after bungling paramedics pronounced him dead and placed him in a body bag – only for a reporter to notice the bag moving.

Raimundo Nonato Santana da Silva, 71, fell off his bike after suddenly falling ill as he travelled to the market in the Brazilian city of Araguaina.

When paramedics arrived at the scene, they pronounced him dead.

Poor Raimundo was then placed in a body bag before the medics left. The police then supervised until the coroners arrived but then something bizarre happened.

A reporter covering the incident suddenly noticed the bag moving very slightly on its own.

Footage taken by Giovanni Pereira does in fact capture a subtle movement and it eventually resulted in the man being rescued.

“When I arrived, the bag was already closed,” he said.

“They (the cops) opened it and I saw a small bubble of air coming out of the corner of his mouth. I performed CPR on him for 10 minutes out of a gut instinct to help.”

The sheepish paramedics were called back to the scene and they took the man to hospital alive. His current condition has not been revealed. 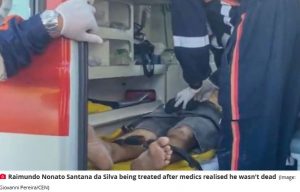 It has since been revealed the medical professionals performed CPR on the man when they first arrived at the scene.

But they pronounced him dead “based on technical evaluation”.

They have said they will look over the man’s medical record to try to understand what happened.

Pereira told G1: “We were in the right place at the right time. I think it was a miracle.”

Incredibly, it is not the first time medics have mistakenly pronounced someone dead.

Last year, a so-called deceased woman gave a morgue worker the shock of her life when she woke up and casually climbed off the mortuary slab.

Saxon is a prolific writer with passion for the unusual. I believe the bizarre world is always exciting so keeping you up to date with such stories is my pleasure
Previous Thousands of Fish Becoming Drug Addicts Because Humans Flush Drugs Down Toilets, Study Says
Next Leopard Breaks Into School In India (Viral Video)