Home / Uncategorized / Boy Attempts To Scare Away Grasshopper. Watch What Happens Next

Boy Attempts To Scare Away Grasshopper. Watch What Happens Next 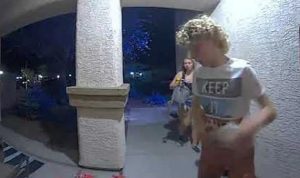 This might be a lesson to kids that grasshoppers may not be as innocent and harmless as people think. This particular grasshopper was in no mood for jokes at all.

A video has gone viral that shows the act of scaring a grasshopper out of your house can backfire, especially if you are not an insect lover. The weak-at-heart out there, please step back. Else, if you are foolhardy enough to “deal” with insects in the house while you are scared of them, this boy’s story might repeat with you.

The video, recorded from a security camera at the porch of a house, shows a young boy scaring away a grasshopper. However, his joy was short-lived as the insect soon scares him out of the porch, into the street.

The video is a clip shows a family outside their home. A teenager from the group steps forward to the door. He nonchalantly shoos away a huge grasshopper from the wall but, within seconds, is himself scared of it when it nears him and flies around. While he shouts and panics and runs out of the porch into the dark street, a woman from the group stands laughing at the scenario. Surely she hadn’t expected such a warm welcome at home.

The video, which was uploaded on YouTube, was taken in Nevada, USA. The senders of the video were quoted saying, “We were coming back to the house after getting a snack and a giant grasshopper was on the porch wall. Thomas tried to shoo it away but it ‘attacked’ him.”

Saxon is a prolific writer with passion for the unusual. I believe the bizarre world is always exciting so keeping you up to date with such stories is my pleasure
Previous Burj Al babas – Watch Bizarre Story Behind Turkey’s Famous Abandoned Castles Now Turned Into Ghost Town
Next Indian Bride Performs Martial Arts Dance At Her Wedding (Viral Video)