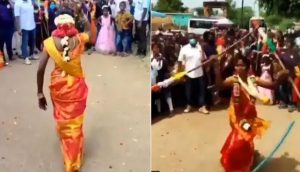 On Monday morning, minutes after her wedding ceremony concluded, a bride in South Indian State of Tamil Nadu, carefully tucked her saree in and gathered her guests around to deliver a spellbinding performance of a 3,000-year-old martial art form. Videos of P Nisha performing Silambam after her wedding have now gone viral on the Internet, earning the 22-year-old much praise and appreciation.

According to The News Minute, Nisha used a sharp, flexible blade to perform ‘Surul Vaal Veechu’, ‘Rettai Kambu’ and ‘Adimarai’ on the road in front of her wedding hall in Thirukolur village in Tamil Nadu’s Thoothukudi. Adimarai or Adi Murai, closely related to Silambam, is a martial art form that originated in modern-day Kanyakumari.

A video of the performance, which Nisha says was done to raise awareness about self defense among young girls, shows her wielding sharp weapons with effortless ease. IAS officer Supriya Sahu was among those who shared the clip.

“Totally floored by this rockstar bride from TN performing Silambam-the ancient martial dance art in her wedding,” she wrote on Twitter. “Nisha you are breaking stereotypes effortlessly. More and more girls should get inspired to learn Silambam.”

n the comments section, many showered praise on the bride. “Astonishing. These are our traditions and must be kept alive…kudos to the bride..” wrote one Twitter user. “Superb. It also sends a subtle message to the husband to be on guard,” another quipped.

Speaking to the Times of India, Nisha said she received martial arts training from her husband, who is also her maternal uncle, 29-year-old Rajkumar Moses.

“It was not easy to perform in a saree and with heavy make up and accessories as a bride. I used to practice martial arts in a t-shirt and track pants,” she told Times of India.

Saxon is a prolific writer with passion for the unusual. I believe the bizarre world is always exciting so keeping you up to date with such stories is my pleasure
Previous Boy Attempts To Scare Away Grasshopper. Watch What Happens Next
Next Thousands of Fish Becoming Drug Addicts Because Humans Flush Drugs Down Toilets, Study Says