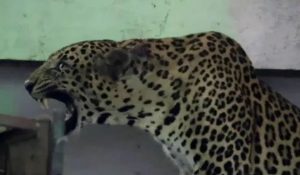 Officials in the Ahmednagar district of Maharashtra were faced with such a challenge when a leopard was sighted in the area. The leopard in question was identified to be an adult male that had sustained injuries. In its injured state, it broke into the canteen of a school in the district. Following this, forest department officials and members of the wildlife group Wildlife SOS arrived at the site to carry out the rescue operation.

According to a video shared on the YouTube page of Wildlife SOS, the big cat was rescued after a four-hour-long rescue operation at Jawahar Navodaya Vidyalaya, located in Takali Dhokeshwar village. In the video shared by the organization, the leopard can be seen moving inside the large canteen of the school.

Describing the rescue operation, the post revealed that the forest department, which was assisted by the wildlife group, “secured all the entry and exit points and carefully assessed the situation.” However, the video showed that it was difficult to locate the leopard as it kept scrambling across the canteen. Upon confirming the location of the leopard, a hole was made in a kitchen door and a tranquillizer was administered to the leopard in order to “immobilize it”.

The leopard is “currently under medical care and observation at the Manikdoh Leopard Rescue Centre in Junnar,” the post attached to the video revealed.

The efforts of the forest department and the wildlife group were praised by users on the Internet. Many left comments applauding the care taken by the officials to ensure that the leopard was not hurt in any which way. Reacting to the video, one user said, “Thank you for saving and treating this beautiful leopard. You are a blessing to this world!”

Another comment said, “Wow, you all are amazing. So many leopards get trapped…Hope the leopard is doing okay and has no injuries.”

One user also said that while it was indeed scary to have a leopard in one’s school canteen, the incident could also be used to educate children. “Scary for the children, but what an awesome teaching moment. I think change really starts with children. And lucky for the leopard that Wildlife SOS was there to rescue it. All of earth’s creatures are a treasure.”

Saxon is a prolific writer with passion for the unusual. I believe the bizarre world is always exciting so keeping you up to date with such stories is my pleasure
Previous Bizarre moment body bag moves after medics wrongly pronounce biker dead
Next Influencer Diipa Buller-Khosla Adds Breast Pumps To Her Cannes Outfit