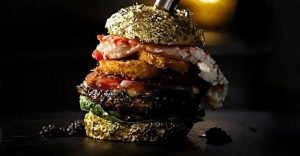 This is a record that is very strange to the average food lover. To buy just one burger for $6,000 is something not many people might want to do even in their dream.

The Golden Boy, a decadent delicacy made with 100 percent Wagyu A5, Beluga caviar, king crab, white truffle, among other premium ingredients, has just broken the record for world’s most expensive burger, with a price of 5,000 euros ($6,000).

The Golden Boy burger was created by Robbert Jan de Veen, owner of Dutch restaurant De Daltons, who came up with the idea while sitting in his restaurant pretending to get some work done. As he browsed the internet to pass the time, he stumbled over the previous record for the world’s most expensive burger, held by an Oregon restaurant that made a $5,000 burger that weight a whopping 352 kilograms, back in 2011. He found it cool, but decided he could make an even more expensive burger, and one that could actually be finished by one person.

“WOW! what a cool record, but what a waste that they made that burger 350kg-heavy,” de Veen said to himself. “If you have a record like that, you should make a burger that one person can eat. Because that’s the real most expensive burger in the world.”

“Restaurants were closed and there were no food competitions due to the pandemic. Though our food takeaway service was on, I was depressed. I was feeling bad seeing the sufferings of the masses and the dismal situation of the restaurant industry,” the restauranteur told The National. “Therefore, I decided to create the world’s most expensive burger and donate the entire income to charity to do good for the society.”

Getting the recipe for The Golden Boy just right took a while and a lot of trial and error, but in the end Robbert Jan de Veen came up with a suitable combination that pushed the price of the world’s most expensive burger to  5,000 euros.

The decadent burger features all sorts of expensive ingredients, from the Dom Perignon champagne-infused buns wrapped in gold leaf, to the Japanese Wagyu beef, Beluga caviar, Joselito Bellota 100% Iberico Vintage Jamon, Cheddar with truffle from Wyke Farms, all smothered in a barbecue sauce made from Kopi Luwak coffee and Macallan Single Malt Whisky Rare Cask, and smoked saffron chive mayonnaise made from duck eggs. Finally, the burger is bathed in whisky-impregnated smoke for added flavor.

“The ingredients complement each other very well and the flavors are intense,” The Golden Boy’s creator said. “Even though this burger is extremely costly, you should still use your hands because that is the only way to eat the burger. Since the bun is covered in gold leaf, your fingers will be golden by the time you finish.”

As Robbert Jan de Veen worked on the recipe, word of a new world’s most expensive burger spread around the Netherlands, and as news reached Geor Schuurman, manager of Remia, a Dutch company that makes margarines, sauces, dressings etc., he approached de Veen to buy the first burger. The two also decided that the honor of eating the first Golden Boy should go to someone who deserves it.

Saxon is a prolific writer with passion for the unusual. I believe the bizarre world is always exciting so keeping you up to date with such stories is my pleasure
Previous Influencer Diipa Buller-Khosla Adds Breast Pumps To Her Cannes Outfit
Next Watch: Windows Shattered In Huge Explosion At Chemical Plant