Gujarat Tribal Woman Paraded Naked By Husband, Others For Eloping With Lover: Police 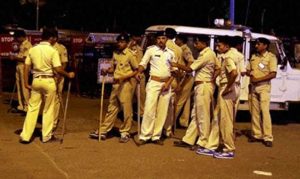 A 23-year-old tribal woman was allegedly stripped of her clothes and paraded naked by her husband and other villagers as punishment for eloping with another man at a village in Gujarat’s Dahod district, the police said today.

A purported video of the incident, which took place earlier this month, went viral on social media, following which the police lodged an FIR on Tuesday and arrested the woman’s husband and 18 others today, sub-inspector BM Patel said.

According to the police, the incident took place in the tribal-dominated area on July 6.

In the viral video, the woman’s husband, along with other men – mostly his relatives, is seen dragging, hitting and stripping his wife in public, in the presence of other women and children, the police said, adding that as punishment, the woman was also forced to walk with her husband on her shoulders.

Although the video shows the woman being covered by other women, the accused can be seen snatching away the clothes brought to cover his wife, the official said.

“The woman had recently eloped with another man. Her husband and other villagers quickly traced them and brought them to the village. On July 6, she was traumatised in full public view as punishment. We have arrested all the accused seen in the video,” Mr Patel said.

The accused have been arrested on the charges of rioting, assault, criminal intimidation and insulting the modesty of a woman under the Indian Penal Code and under relevant provisions of the IT Act for shooting and circulating the video of the incident, the official said.

Saxon is a prolific writer with passion for the unusual. I believe the bizarre world is always exciting so keeping you up to date with such stories is my pleasure
Previous Women Fall Off Swing On The Edge Of A 6,300-Foot Cliff In Chilling Video
Next King Cobra Tries To Follow Child Indoors In Hair-Raising Video