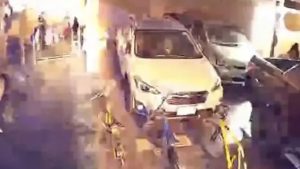 A video of the impact of a powerful explosion at a chemical factory on the outskirts of Bangkok last week is now going viral. The video showed how intense the blast was, as it shattered windows into smithereens and dislodged the glass shards at a distance onto the road. The entire neighbourhood in Bang Phli district was illuminated as if someone was throwing a gigantic flashlight over the area. The impact of the blast was also felt in Bangkok’s primary airport terminal and prompted authorities to evacuate the area within a five-kilometre radius.

CCTV footage from the explosion on July 5 shows that immediately after the windows were shattered, the whole area got illuminated, possibly as the fire rose above in the sky through the clouds of smoke at the blast site.

Several people have commented on the YouTube video about the power of the explosion.

A second user, dm7097, wondered how bad the building codes in Thailand could be. “I mean the entire window (frame and all) literally fell out of the wall!!”.

The explosion in Bangkok took firefighters more than 24 hours to bring under control. An aerial view of the site of the blast, posted by Bangkok Post, an English-language daily in Thailand, on its official Twitter handle, showed nothing but debris.

Saxon is a prolific writer with passion for the unusual. I believe the bizarre world is always exciting so keeping you up to date with such stories is my pleasure
Previous World’s Most Expensive Burger Costs $6,000 (Video)
Next Women Fall Off Swing On The Edge Of A 6,300-Foot Cliff In Chilling Video