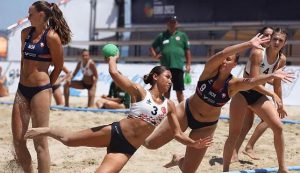 Norway’s women’s beach handball team was fined 1,500 euros on Monday after players opted to wear shorts instead of bikini bottoms at a European championship match in Bulgaria. The European Handball Federation (EHF) said in a statement that its disciplinary commission had dealt with “a case of improper clothing” as the shorts were “not according to the Athlete Uniform Regulations defined in the IHF Beach Handball Rules of the game”, reports ABC News.

According to International Handball Federation rules, women athletes must wear bikini bottoms “with a close fit and cut on an upward angle toward the top of the leg.” On the sides, the bottoms can be no longer than four inches. Men, on the other hand, can wear shorts four inches above the knee.

The Norwegian Handball Federation (NHF) said on social media that it was proud of the women for taking a stance against the much-criticised and controversial rule. NHF, in fact, has been complaining about the rule since 2006.

“We at NHF stand behind you and support you. Together we will continue to fight to change the rules for clothing so that players can play in the clothes they are comfortable with,” the federation wrote.

The players were fined 150 euros each by the European Handball Federation. NHF is going to pay the fines.

The women’s handball team decided to wear shorts and flout the uniform rule on purpose, hoping to draw attention to the issue and the double standards that women athletes face.

Norwegian player Martine Welfler told New York Times, “I don’t see why we can’t play in shorts. With so much body shaming and stuff like that these days, you should be able to wear a little bit more when you play.”

Saxon is a prolific writer with passion for the unusual. I believe the bizarre world is always exciting so keeping you up to date with such stories is my pleasure
Previous Shocker! Family Discovers 18 Snakes Living Under Bed
Next Japanese Government Appoints Pokémon Characters As Ambassadors (Video)