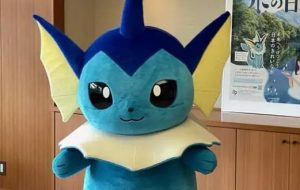 The government of Japan there has appointed popular Pokémon characters as mascots in a bid to raise awareness of ‘Water Day’. A number of these characters are handling important sectors. Just believe this.

A Vaporeon water-type Pokémon has been appointed by Japan’s Minister of Land, Infrastructure, Transport and Tourism as an ambassador for ‘Water Day, which takes place’ on 1 August.

Like the UK, which is currently experiencing some of its warmest temperatures to date, Japan is also nearing its hottest period of the year.

As a result, the Japanese government has coined the first few days of August as ‘Water Week’.

It is hoped that the adorable little Pokémon will help inspire, educate, and raise awareness of the importance of water ‘to all living organisms with its aquatic form and way of living.’

The initiative wants to better people’s relationship and understanding between water resources and conservation.

Other Pokémon have also been handed important roles.

Lapras was also recruited by the Japanese government as the mascot for Miyagi prefecture’s public transportation system as well as for dams.

With climate change an ever-pressing issue for all of us across the globe, and as temperatures continue to rise, it is hoped that the Pokémon characters will help to engage with a whole new audience in a fun and exciting way – which current formats in politics can often fail to do.

The festivities will continue until the end of that week culminating on the last day – August 7th.

Marine Day, a Japanese national holiday that celebrates the ocean and the resources it provides to the country and its people is different to the ‘Water Day’ that Vaporeon is promoting.

Saxon is a prolific writer with passion for the unusual. I believe the bizarre world is always exciting so keeping you up to date with such stories is my pleasure
Previous Norway’s Women Handball Team Fined For Not Wearing Bikini Bottoms
Next Woman Locked In 7-Year Battle With Government To Prove She’s Alive