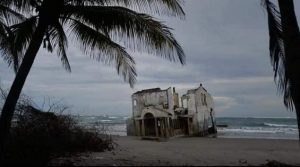 This is definitely not a house you would want to rent but it’s a story you wouldn’t mind reading.

A mysterious ruined villa was recently discovered on a beach in Costa del Sol, El Salvador, leaving tourists scratching their heads at how it got there.

This is one of the last things anyone would expect to find washed up on a tropical beach – a concrete villa. Yet that’s exactly the kind of bizarre attraction that beachgoers at the picturesque La Puntilla Beach are treated to these days.

No one knows how the abandoned home ended up on the popular beach, but it seems to have been there a while, as it is covered up with what appears like recent graffiti. One of the most popular theories is that the villa was the victim of a powerful hurricane that his El Salvador over two decades ago.

The abandoned villa of La Puntilla Beach was popularized by Salvadoran TikTok user Cholopanza Vlogs, who filmed himself exploring the abandoned structure and also posted a more in-depth vlog about it on YouTube. The footage went viral and tourists have been flocking to the ruined villa ever since.

The history of this derelict structure is shrouded in mystery, but El Salvadoran newspaper La Prensa Grafica, recently shed some light on its past, relying on accounts from locals living near La Puntilla Beach.

Apparently, around 28 years ago, the so-called villa was actually a hotel called Hotel Puerto Ventura. To make it more appealing to tourists, the owners decided to build it several meters into the sandy beach, but that proved a disastrous idea as it made it more vulnerable to the elements.

It’s unclear whether the hotel became a victim of hurricane Mitch, which hit El Salvador in 1998, causing extensive damage and over 9,000 fatalities, or if it was just the advancing ocean and the salty air that caused it to be abandoned. It later became the headquarters of a Christian church, which explains the large star of David on the ceiling of the first floor, but as the structure continued to deteriorate, it was once again abandoned. 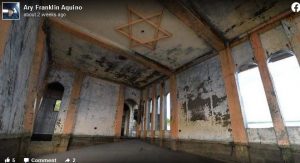 “They built too deep into the beach, that’s what happened,” one local fisherman weighed in on the tragic fate of the hotel. “Before, official permission was not requested to build, and that is what happened, they went too far.”

Today, the cracked structure remains on the beach, leaning on the beach just at the point where the waves hit the sand. It’s more accessible during the morning hours, as the water recedes, but it returns with a vengeance in the afternoon, flooding the place and creating pools of water. That hardly stops tourists from exploring it, though.

Despite the large cracks in the walls, and the obvious crumbling danger, adrenalin junkies venture inside the abandoned structure, and some even climb on the top floor to take selfies and get a better view. Locals, on the other hand are more wary, with some admitting that they have never even come near it out of fear.

Local woman Coralia Sotelo told La Prensa Grafica that kids in the area have told her that at night they see a very tall black man hanging around the derelict building, which is why she always keeps her distance.

Saxon is a prolific writer with passion for the unusual. I believe the bizarre world is always exciting so keeping you up to date with such stories is my pleasure
Previous Viral Video: Politicians Scramble To Their Feet As Rat Enters Parliament In Spain
Next Marathon Runner Learns to Live Without Stomach, Colon and Gallbladder After They Were Removed Due To Strange Illness