Home / Uncategorized / Marathon Runner Learns to Live Without Stomach, Colon and Gallbladder After They Were Removed Due To Strange Illness

Marathon Runner Learns to Live Without Stomach, Colon and Gallbladder After They Were Removed Due To Strange Illness 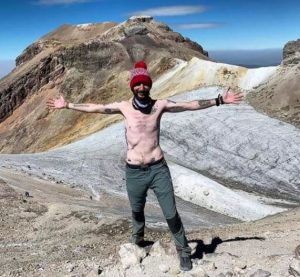 A 36-year-old Juan Dual, has had his stomach, colon, rectum and gallbladder removed, for some now but he has learned to live without them.

Juan’s sad but inspiring story began when he was only 13-years-old. It was then that he was diagnosed with a terrible hereditary condition called familial multiple polyposis, which left him with a 99.8% chance of developing cancer of the digestive system. His grandmother and an uncle of hers died of colon adenocarcinoma, and his father had undergone surgery of the bowels to avoid succumbing to the same fate. At age 19, right after finishing high-school, Juan underwent a tough operation to have his colon and rectum removed. Sadly, it was only the beginning.

By age 28, Juan’s situation had worsened. The disease had affected his stomach, so he needed to have that removed as well. A postoperative hemorrhage almost cost the young Spaniard his life, but he miraculously managed to pull through. His troubles didn’t end there, though. After dropping to a weight of just 57 kilograms, he struggled to stand up and take a few steps.

And, as if things weren’t already bad enough, a dangerous bacteria infected his gallbladder so he had to go under the knife again to have it removed.

“I lost 50% of my body mass and I was completely without strength,” Juan, who once weighed 106 kilograms, told El Comercio.

Having just recovered from a series of serious surgeries, and with a serious economic crisis gripping Spain, Juan Dual decided to accept the invitation of some friends of his parents and travel to Japan. It was there that things started to change for the better. He didn’t speak a word of Japanese, so he spent most of his time walking the dog. One day, the dog pulled harder, and Juan realized that he could still jog, and he started to do just that.

Months later, he found himself working in a small, peaceful town in England. There was little in terms of entertainment, but the town was surrounded by hills, so he dedicated even more of his time to running. He befriended some likeminded folks and told them what he had been through, and they seemed amazed at the fact that he was still alive, let alone that he was pushing himself to exercise. That’s when the idea of focusing on motivating others took root in his mind.

With the help of Pepa, a nutritionist, Juan Dual slowly relearned how to eat to keep his energy level high enough to sustain him during physical activity. Eight months after his last operation, he finished the Barcelona half marathon in two hours. He then started training for mountain running and ultra-marathons. He claims sport keeps him healthy and motivated.

Saxon is a prolific writer with passion for the unusual. I believe the bizarre world is always exciting so keeping you up to date with such stories is my pleasure
Previous Abandoned Building Mysteriously Shows Up on Beach in El Salvador (Video)
Next Monkey Takes Over School Principal’s Chair In India (Viral Video)