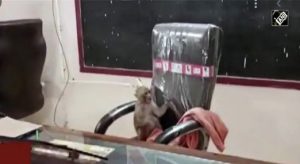 A monkey was seen in Madhya Pradesh’s school, sitting on the Principal’s chair. A troop of monkeys was roaming and playing in the classroom.

The school located in Gwalior, Madhya Pradesh, India, recently had a tough time with this unexpected guest who managed to get a hold of the principal’s chair and then refused to move without knowing it was actually on the number seat in that school.

Things got a tad trickier because the monkey seemed to have taken a fancy to the chair.  The entire incident was caught on camera and the 1.15-minute clip has gone viral since. In the video, the monkey, oblivious to the panic it is creating, is shown happily occupying the principal’s chair at the government school.

Several staff members are seen to trying to intervene and chase animal away, at least from th principal’s seat.

The monkey, on its part, looks quite content with its new seat.  The curious animal even makes an effort to remove the plastic sheet used to cover the chair. After a few seconds, the monkey leaves the chair and runs into the corridor, after a staff member approaches the animal.

Saxon is a prolific writer with passion for the unusual. I believe the bizarre world is always exciting so keeping you up to date with such stories is my pleasure
Previous Marathon Runner Learns to Live Without Stomach, Colon and Gallbladder After They Were Removed Due To Strange Illness
Next Watch As Olympic Athlete Uses Condom To Repair Canoe, Goes On To Win Gold Medal