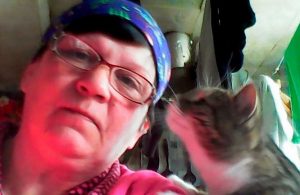 A woman who killed two of her husbands died on her sofa – but not before recording a video revealing where she buried a third.

Russian ‘black widow’ Elena Mitrofanova, 55, took her own life and passed away on her living room couch.

But she left a note reading “Watch the video on my phone”, directing investigators to a shocking self-recorded clip in which she revealed the vegetable patch location of murdered husband Yury Mitrofanov, 58.

Neighbour Valentina Shevekova said she was not surprised by the striking revelations.

She said: “This was to be expected – it wasn’t the first time she had attacked him with a knife.

“She had killed two before – her hubbies.”

Fellow villager Taisia Aleshenkina added: “She had spent 20 years in jail in total.”

He said: “She was twice convicted for murder.”

A murder investigation has also begun, though its likely culprit will never face justice.

The Black Widow’s three victims were all between the ages of 70 and 80.

Saxon is a prolific writer with passion for the unusual. I believe the bizarre world is always exciting so keeping you up to date with such stories is my pleasure
Previous Creepy! Here Is Exactly What Happens To Our Bodies When We Die
Next Die-hard Gamers Continue Playing Video Game in Flooded Cyber Cafe