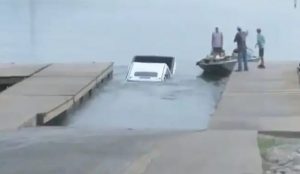 A viral video shows moments a car gradually sank into a lake after hitting a reporter.

The reporter in Illinois was hit by a car. In the vehicle’s defence, it can be seen silently sliding off the boat launch, into Lake Springfield as the reporter was filming a live shot.

The clip of the incident, which took place on July 29, was shared on social media by football writer Brian Floyd and soon went viral.

In it, the reporter who has been identified to beJakob Emerson from WICS NewsChannel20 can be seen talking about the construction of a lake that has become a bone of contention in the area. Even as he does this, the vehicle has been seen slipping into the reservoir behind it. Mr Emerson immediately asks the cameraperson to focus on the sinking vehicle instead. Few people can be seen standing on a boat next to the sinking car, watching it be sucked into the water rather helplessly.

In less than four hours, the clip has been viewed over 136,000 times. Several users had a lot to say about the incident.

Reacting to the clip, one user said cheekily, “Another episode of ‘without a trace’.”

Another episode of “Without a Trace.”

However, according to ABC 20, the vehicle was empty as the owner was taking a boat onto the lake with a woman and a boy when the incident occurred.

The Sangamon County Rescue Squad confirmed it on Facebook and said, “Last night, SCRS responded to Spaulding Dam boat launch at Lake Springfield to assist with the recovery of a submerged vehicle. No injuries were reported with this incident.”

Saxon is a prolific writer with passion for the unusual. I believe the bizarre world is always exciting so keeping you up to date with such stories is my pleasure
Previous Die-hard Gamers Continue Playing Video Game in Flooded Cyber Cafe
Next Man Conducts Olympic Games For Countries With The Biggest Average Penis Size