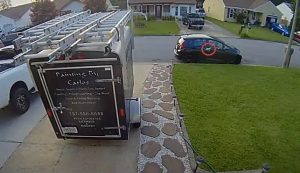 Bizarre footage from Virginia, US, shows a fish falling out of the sky and slamming into a parked vehicle. The home’s security doorbell camera in Virginia Beach captured the incident and it has left hundreds of people scratching their heads in confusion. The homeowner, Carlos Maldonado, told ViralHog that he was informed of the fish hitting the car by neighbours, but initially refused to believe them. It was only when the family checked their security footage that they realised a fish had, indeed, fallen from the sky.

“Car was parked. A claim was already pending on another part of the car that got damaged, and then the fish fell from the sky and bent the spoiler,” Mr Maldonado said. “The neighbours said it sounded like a gunshot and they came over to investigate and saw the fish and knocked on our door. We said ‘Yeah right, a fish fell from the sky?'”

However, upon reviewing their Ring camera footage, the Maldonados realised their neighbours had been right. The video shows a fish falling down on the parked car before flopping over onto the lawn.

“We searched the ring video and saw the fish fall from the sky and hit the car. I had to call StateFarm and make another claim, at least we had the video to prove this story,” Mr Maldonado said.

The video has racked up thousands of views on YouTube, along with a ton of puzzled comments.

“Wow, flying fish really do exist,” quipped one viewer. “Someone must have thrown it from a distance,” another suggested.

Some viewers theorised that the fish could have been dropped by a bird that was seen flying at the beginning of the video. “If you watch the sky to the left at the beginning you will see a bird flying and drop it,” a commenter wrote.

Saxon is a prolific writer with passion for the unusual. I believe the bizarre world is always exciting so keeping you up to date with such stories is my pleasure
Previous Watch: Man Drives With Girlfriend Tied To Roof In Bizarre ‘Trust Test’
Next Mom Chases Toddler As He Runs Onto Soccer Field During Game (Viral Video)