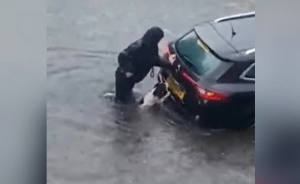 A woman in a flooded road in Glasgow, Scotland, has become an internet sensation following a performance put up by her dog to assist her. The woman’s dog has become a celebrity for that action shown in a viral video.

The story involved a stranded car, a woman, and her dog. Making for wholesome content that most Internet users scout social media platforms for, the cute canine refused to be an inactive bystander as the woman struggled to push the vehicle. In a clip that has the Internet going “aww,” the dog is seen lending a very helpful paw —  or two — to his owner Lori Gillies as the duo pushed the vehicle down the heavily inundated street.

The video of the clip was shared on Facebook by Lori Gillies, the proud owner of Puck, a springer spaniel. In the clip, Ms Gillies and Puck are seen circling around the car a few times as she communicated with the two women stuck inside the vehicle. After this, the duo trudged through the water, pushing the car to a drier area.

Sharing the video, Ms Gillies said, “It’s the commentary for me. The legend behind the video is a local dude called Davie Keel. Just doing a good deed helping this car and its owners get to drier land. Someone has filmed it and sent it to their pal, who sent it to my pal who sent it to me. Puck really is the best dog in the whole wide world,” acknowledging the hilarious voiceover by Mr Keel who praised Puck’s drive and enthusiasm.

“Puck and I were out on our usual walk and there was a car that was stuck in the water. There were two women inside and I went down to give them a hand,” Ms Gillies was quoted as saying by Daily Record. She added that Puck was initially just swimming next to her. “I took my phone out to video him and then he started pushing it.”

Reacting to the video that the 33-year-old shared, users inundated the post with heart emoticons. One user named Lauren Smith said, “The dog was helping, I might cry.”

Saxon is a prolific writer with passion for the unusual. I believe the bizarre world is always exciting so keeping you up to date with such stories is my pleasure
Previous Mom Chases Toddler As He Runs Onto Soccer Field During Game (Viral Video)
Next (Viral Video) Woman Rescued From 50-Foot Well In India