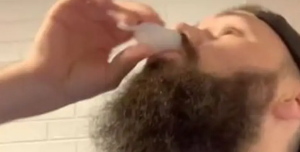 A man has horrified social media users after mistaking his girlfriend’s menstrual cup for a shot glass and using it to knock back a drink.

The man who found his other half’s menstrual cup was left stumped trying to work out what it was used for, so he took to social media to ask his followers before sharing his own ideas on what the object was.

TikTok user @dduche shared a clip of himself in which he asked: “Someone please explain to me what this is.”

The man seemed to initially think it could be used to apply make up, but then he changed his mind and settled on the idea that it was shot glass and filmed himself downing a shot from the – hopefully clean and unused – cup.

He went on: “What kind of make-up device is my girlfriend using? Is this for, like, application? No.

“Why does it have a tail? This feels illegal to have. 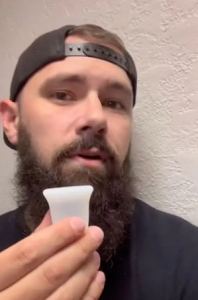 “Hold on a minute, I think I know what this is for. Is this a portable shot glass? It’s like a perfect size. Look at this.

“And then you, like, wring it out so nobody knows what’s in there.

“Ladies please help me out and tell me what this is in the comments.

And he is, indeed, dead wrong, with thousands of TikTokers quick to point that out while taking the p**s out of him for the mix-up.

One person said: “How do you tell a man that he just drank out of and played with a menstrual cup?”

Another wrote: “I can’t count how many times I yelled ‘NOOOOO’ at my cell while watching this.”

A third joked: “It’s a shot glass for Dracula.” 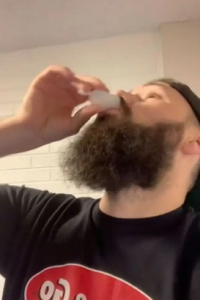 While a woman warned: “Men, this is why you need to keep out of women’s things – you’re going to get hurt.”

Another person commented: “He put it in his mouth. The poor man. Wait until he finds out.”

The clip has since been viewed almost 30 million times and the man has since confirmed he’s now fully aware of what the object is used for.

Saxon is a prolific writer with passion for the unusual. I believe the bizarre world is always exciting so keeping you up to date with such stories is my pleasure
Previous Woman Claims To Be Married To The Ghost Of Michael Jackson
Next Lionel Messi’s Used Tissue From Barcelona Farewell On Sale For $1 Million (Photos)