Watch: Alligator Sneaks Up On Friends Fishing In Florida Everglades 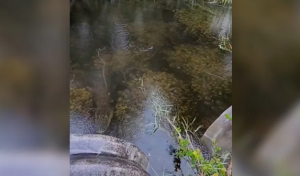 A fishing group in Florida went viral after they had a rather unexpected guest barge in on their fun time.

The group of friends had a strange visit from a massive alligator that sneaked up on them from the water. A video of the incident was initially shared on TikTok on Tuesday and garnered more than 25 million views.

Soon enough, the video went viral across social media platforms with viewers expressing shock and fear at what they were witnessing. In the video, a woman is filming one of her friends with a fishing line in the water. They are apparently trying to spot the alligator they had seen previously in the shallow water. With a plastic bait in hand, the man can be seen standing over a storm drain. As the group remains engrossed in their task, the alligator can be seen approaching the area where the woman is standing, staring at her with an eerie calmness in its eyes.

In the clip, the woman can be overheard saying that the alligator is staying away from the bait as it is not real. Just as she does this, she spots the alligator and swears in fear. “I’m racing. Feel my stomach, I’m shaking,” she can be heard saying.

The woman moves away, but the man standing over the storm drain remains in the same position without budging. The group can be heard talking loudly in the video, which could have led to the alligator feeling agitated. However, in this case, the alligator did not come out of the water.

The video was also shared on Instagram with the caption, “Florida Everglades never fails to amuse and terrify.”

The Everglades is the name given to the tropical wetlands in Florida, US.  The state records an average of seven unprovoked alligator bites every year, which need hospitalization, according to the Florida Fish and Wildlife Conservation Commission. The Daily Mail also stated that the Texas Parks and Wildlife group has asked those who find themselves in “close proximity to an alligator should back away slowly from the animal rather than running.”

Saxon is a prolific writer with passion for the unusual. I believe the bizarre world is always exciting so keeping you up to date with such stories is my pleasure
Previous Customers Shocked as Python Peeps Out Of Spice Shelf At Sydney Supermarket
Next Woman Claims To Be Married To The Ghost Of Michael Jackson