Home / Uncategorized / Sea Snakes ‘Attacking’ Divers Are Just Trying To Have Sex With Them, Scientists Say

Sea Snakes ‘Attacking’ Divers Are Just Trying To Have Sex With Them, Scientists Say 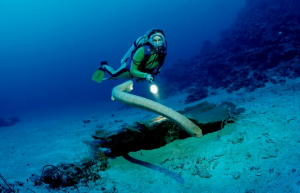 Sea snakes that have long been known to “attack” human divers are probably just on the prowl for sex, according to the authors of a new scientific paper.

To back up a little bit, yes, sea snake incidents are something that can happen. A venomous creature known as the olive sea snake, which inhabits tropical coral reefs and can grow up to six feet, has been reported to have attacked human divers “unprovoked” ― which, even if the snake doesn’t bite, can put divers in danger by understandably throwing them into a panic, note the researchers in the paper, published in Scientific Reports on Thursday.

The researchers reviewed available data on sea snake attacks and noticed some interesting things. The “attacks” mainly involved males during breeding season, and occurred in the midst of activities like sea snake courting rituals or two rival males fighting.

“In fact, it’s just a lovesick boy looking for a girlfriend and making a rather foolish mistake,” herpetologist and study co-author Rick Shine of Macquarie University in Australia told the New York Times.

The snakes have somewhat poor vision and are seemingly launching themselves at divers in an attempt to find out whether they’re suitable mates, study co-author, Ross Alford, professor emeritus Australia’s James Cook University, told the Australian Broadcasting Corp.

“They just go, ’Hey, there’s a big thing over there. I’ll just go check if it’s a female snake,’” he said, adding that once the snake realizes his error, he’ll typically leave.

That’s why Alford recommended that if you find yourself in this unpleasant situation, simply stay calm and allow the snake to “investigate” you “with its tongue.” Shine also noted that sea snakes move so fast, you probably won’t be able to get away anyway, and trying to fight is just likely to make the snake more aggressive.

Saxon is a prolific writer with passion for the unusual. I believe the bizarre world is always exciting so keeping you up to date with such stories is my pleasure
Previous Lionel Messi’s Used Tissue From Barcelona Farewell On Sale For $1 Million (Photos)
Next Watch: 6 Men Form Human Chain To Rescue Children From Burning Building