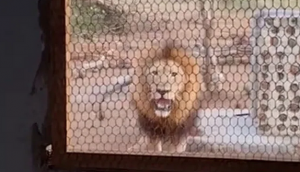 A 46-year-old man at a Game Reserve in South Africa woke to for an early morning coffee in his house only to find a lion growling at him by his window.

The man decided to film the events on his camera and the video has gone viral.

A viral video shot on June 25, 2021, shows Dylan Panos inside an open kitchen at a camp. He tries to brew his coffee but a lion keeps roaring at him whenever it spots him through the window.

There is also a lioness lying right next to the kitchen wall. Dylan, who runs the nature guide training company Bhejane Nature Training, makes it clear that the lion is here to mate but the lioness doesn’t want to be bothered. The video was released on YouTube by a channel called ViralHog.

Soon, Dylan successfully puts the kettle on the flame. The lioness now sits on the front porch of the hut and the lion is still after her. Dylan shows us that the kitchen and the dining room have no doors and only wire mesh on the windows. The lion keeps growling at Dylan whenever it spots him through the window. However, the caption in the video clarifies that Dylan won’t be in any danger until he interrupts the lion’s pursuit.

Dylan plays around by chiding the lion for its “very rude behaviour”. He also laughs at the big cat’s determination and says, “Very funny lion you are”.

Meanwhile, some Bhejane students sit in a parked vehicle at a distance and wait for the wild beasts to pass.

Saxon is a prolific writer with passion for the unusual. I believe the bizarre world is always exciting so keeping you up to date with such stories is my pleasure
Previous Watch: 6 Men Form Human Chain To Rescue Children From Burning Building
Next Chinese chef killed by snake bite 20 minutes after chopping its head off to prepare soup