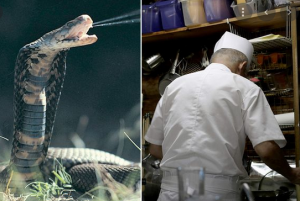 Some deadly animals remain deadly even after their death. A Chinese chef just had this as his last lesson on earth as help came late before he breathed his last.

Soups made with the flesh of deadly spitting cobras are considered a rare delicacy in South China – but preparing it turned out to be a fatal move for one chef.

Peng Fan, from Foshan, was proud to have it on his menu and was preparing the dish for diners when an unusual tragedy happened.

Having decapitated the Indochinese Spitting Cobra, he spent 20 minutes making the soup, then started tidying the kitchen. He picked up the head to throw in the bin when suddenly, it bit him.

The venom from spitting cobras is particularly nasty stuff.

It contains neurotoxins which can kill within 30 minutes, paralysing the victims and suffocating them to death. Anti-venom is available but must be taken quickly. 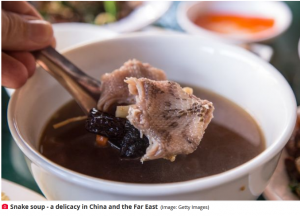 Restaurant guest Lin Sun, 44, said: ‘We were in the restaurant having a meal for my wife’s birthday when suddenly there was a lot of commotion.

“We did not know what was happening but could hear screams coming from the kitchen.

“There were calls for a doctor in the restaurant but unfortunately by the time medical assistance arrived the man had already died.

“After we heard that we did not continue with our meal.”

A police spokesman said of the incident, which happened in 2014: “It is a highly unusual case but it appears to be just an accident. Mr Fan had a very severe reaction to the bite.

“There was nothing that could be done to save the man. Only the anti-venom could have helped but this was not given in time.

“He prepared the snake himself and was just unlucky. It was just a tragic accident.”

Experts say snakes and other reptiles can still make reactive movements for up to an hour after being killed.

One said: “It is perfectly possible that the head remained alive and bit Peng’s hand. By the time a snake has lost its head, it’s effectively dead as basic body functions have ceased, but there is still some reflexive action. It means snakes have the capability of biting and injecting venom even after the head has been severed.”

In some countries it is believed eating snake meat has mystical health benefits, which has led to some species being hunted almost to extinction.

Saxon is a prolific writer with passion for the unusual. I believe the bizarre world is always exciting so keeping you up to date with such stories is my pleasure
Previous A Man’s Close Encounter With Lion Growling Through Kitchen Window (Viral Video)
Next Shocking Video As Ceiling Fan Falls Down During Family Dinner