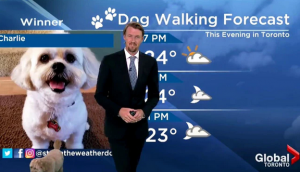 A dog in Canada has gone viral after wandering into the frame as his human presented a weather report. Anthony Farnell, chief meteorologist for Global News, was on-air when his puppy interrupted him, reports USA Today. Footage of the moment has gone viral on social media, with general consensus being that the weather report was only made better by the addition of the mini goldendoodle.

In the viral video, Storm the goldendoodle can be seen wandering onto the green screen set, possibly in search of something to eat.

“Yes, Storm is in the building, getting some treats, walking on thin air,” Mr Farnell joked as the pup wandered across the screen, looking curiously at his owner from time to time.

“Last Friday, a hungry-for-treats Storm invaded the set in the middle of Anthony’s weather report, demanding treats even as Farnell was explaining to Ontarians what weather they would be facing that weekend, and discussed the dangers posed by Hurricane Ida further south,” Global News wrote while sharing the video on YouTube Tuesday.

The video also made its way to other social media platforms like Twitter, where people could not stop laughing after watching the curious dog.

One version of the clip has racked up a whopping 1.8 million views on the microblogging platform, along with hundreds of amused comments. Many Twitter users shared their own favourite dogs-interrupting-humans moments in the comments section.

Saxon is a prolific writer with passion for the unusual. I believe the bizarre world is always exciting so keeping you up to date with such stories is my pleasure
Previous Severed Feet With Trainers Keep Washing Up On US And Canada Shore
Next Fisherman Gets Pulled Into A Lake By Huge Fish (Viral video)