Fisherman Gets Pulled Into A Lake By Huge Fish (Viral video) 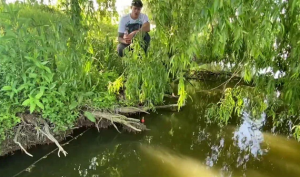 A video released on YouTube shows a man named Lorant Szabo who went fishing at Lake Harsasberki one fine day in June. Only, it did not turn out to be very fine for him. We see him waiting with his fishing rod when a fish pulls at it. He jumps and tries to pull it up to the banks. But ultimately, he himself falls into the lake. This happened in Somogy County, Hungary.

Mr Szabo has been fishing at the lake since his childhood. However, as he sat waiting for a good catch this day, a huge catfish tugged at the bait. Within moments, Mr Szabo lost control of his fishing line and the cord somehow cut under the threads and he could no more pull the brakes. That’s how he was pulled by the lurching fish into the water.

The incident got videotaped and was previously released by Mr Szabo that month. It took no time to go viral over the Internet. In the caption to the video on his own channel, Mr Szabo wrote that he struggled for an hour to find his fishing rod in that lake.

Now, the latest one quotes Mr Szabo’s explanation, “The line got stuck, so the huge fish pulled me into the water. Later managed to catch, it was 66kg.” Indeed, that was a good catch, Mr Szabo.

Has the video amused its viewers? Of course, it has. One person commented from the hilarious perspective of the catfish, “Fish: ‘Hey buddy, wanna go for a ride.” Another person mused, “I assume it was a giant Wells Catfish.” One viewer also dropped in a suggestion, “Looks like he lost his pole and the fish. Never let go of the pole.”

A viewer wrote with a taunt, “Who is fishing who.” Another person coined a perfect phrase to describe Mr Szabo’s plight and commented, “Got catfished.”

We’ll say Mr Szabo got lucky that it was only a catfish in a county lake. Earlier, we had seen an alligator sneak up on a group of friends who went fishing at a lake in Florida.

The video showed a massive alligator appearing from nowhere while the friends were busy teaching a small fish.

Saxon is a prolific writer with passion for the unusual. I believe the bizarre world is always exciting so keeping you up to date with such stories is my pleasure
Previous Dog Interrupts Weather Report, Steals The Show In Hilarious Video
Next Mother Fights Off Mountain Lion With Bare Hands To Save Her 5-Year-Old