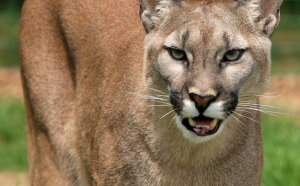 A woman in California has been praised as an “absolute hero” for rescuing her five-year-old son from a mountain lion attack. According to the California Department of Fish and Wildlife, the child was playing outside his house near Calabasas in Los Angeles County on Thursday when the mountain lion attacked, dragging him about 45 yards.

Alerted by the boy’s screams, his mother ran outside and started striking and punching the mountain lion with her bare hands until the animal released the child.

“The commotion caused by the attack and the boy’s screaming alerted the mom who was inside. She ran outside and immediately started striking and punching at the lion and managed to fend the lion off her son,” said Captain Patrick Foy with the California Department of Fish and Wildlife to CBS News. “This mom’s an absolute hero who saved her son’s life, there’s no question about it.”

The mountain lion managed to inflict wounds to the boy’s head, neck and upper torso. Authorities said he was transported to the hospital immediately by his parents and will remain there as he recovers from his injuries. The boy, whose name was not released, is now in a stable condition.

The animal was later shot dead by wildlife authorities.

In a statement, the California Department of Fish and Wildlife (CDFW) said that a wildlife officer who reached the scene discovered an aggressive mountain lion crouched in the corner of the property. Due to its “behavior and proximity to the attack”, the warden believed it to be the same mountain lion that had attacked the child and shot it dead.

“The warden believed it was likely the attacking lion and to protect public safety shot and killed it on site,” CDFW said.

Saxon is a prolific writer with passion for the unusual. I believe the bizarre world is always exciting so keeping you up to date with such stories is my pleasure
Previous Fisherman Gets Pulled Into A Lake By Huge Fish (Viral video)
Next Jealous man chops off pal’s joystick with axe because it was bigger than his