Leopard, Cat Fall Into Well During Chase. See What Happened Next (Viral video) 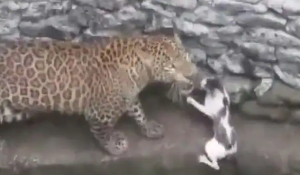 A video released by news agency ANI has grabbed eyeballs on social media. The video shows a cat facing a leopard while the two animals were stranded inside a well. The video is from Nashik, Maharashtra, India. According to deputy conservator of forests (West, Nashik Division) Pankaj Garg, the leopard fell into the well while chasing the cat. In the video, we see the leopard charging at the cat initially.

The two animals were then seen being playful with each other. In a subsequent tweet, it was gathered that both the leopard and the cat were “safely rescued and released by the forest department”.

The two felines were rescued safely hours later by forest department personnel, an official said on Monday, according to news agency PTI.

The incident took place in Kankori village under Sinnar taluka, where the leopard may have fallen into the well while chasing the cat on late Saturday night, the official said.

Both the animals were rescued safely from the 25 to 30 feet deep well with the help of a crane on late Sunday evening by the forest department, the official said.

The leopard, which did not harm the cat during the face-off, was later released in its natural habitat, he added.

Saxon is a prolific writer with passion for the unusual. I believe the bizarre world is always exciting so keeping you up to date with such stories is my pleasure
Previous Snake Catcher Escapes King Cobra Attack in Shocking Video
Next Duck heard shouting ‘you bloody fool’ after picking phrase up from humans (Video)