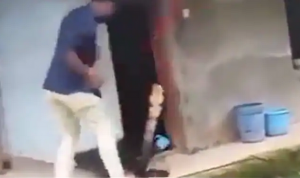 A man said to be a seasoned snake catchers in Karnataka, India, narrowly avoided getting attacked by a hostile king cobra in a video that has now gone viral online.

The footage shows the snake catcher trying to rescue a snake from a bathroom. ETV Bharat identified him as snake expert Ashok from Belthangady, located in the Dakshina Kannada district of Karnataka. The area has a sizeable population of snakes.

In the footage, only the tail of the 14-foot king cobra is visible initially, peeking out of the bathroom’s doorway. The snake catcher bends down to grip the tail and begins pulling it towards himself. However, he is forced to jump back in horror when the snake, a venomous king cobra, suddenly rears its head and jumps out, ready to strike.

Luckily, Ashok managed to avoid getting attacked by the snake, retreating just in time.

Saxon is a prolific writer with passion for the unusual. I believe the bizarre world is always exciting so keeping you up to date with such stories is my pleasure
Previous Teenage boy injects himself with lethal mercury to be like favourite X-Men superhero
Next Leopard, Cat Fall Into Well During Chase. See What Happened Next (Viral video)