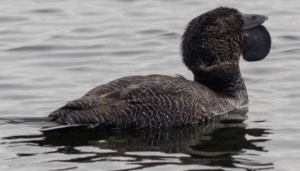 A duck has stunned the internet after it was recorded repeatedly saying “you bloody fool” which it picked from humans.

Ripper, an Australian musk duck, was kept in captivity at Tidbinbilla Nature Reserve, south west of Canberra, when researcher Dr Peter Fullagar made the recording in 1987.

The audio resurfaced only when Prof Carel ten Cate of Leiden University in the Netherlands came across an obscure reference to a talking duck in a book on bird vocalisations.

In the 22-second clip, Ripper can heard repeating the phrase “you bloody fool” a few times as well as some background disturbance that appears to be someone slamming the door.

Experts believe the animal learned the phrase from his caretaker and made his vocalisations during aggressive mating displays.

This is the first documented instance of ducks being able to mimic sounds and has researchers reviewing the evolution of vocal language learning in birds.

“But it turned out to be true.

“This came as a big surprise … it remained unnoticed by researchers in the vocal learning field until now.

“That makes it a very special rediscovery.”

He also suggested that Ripper could be saying “food”, rather than “fool”, adding: “I can imagine that the caretaker would jokingly say, ‘Okay, here is your bloody food’.”

Other birds and dolphins can also mimic sounds but it is very rare for ducks to achieve it.

The expert said: “We know that songbirds, parrots and hummingbirds can learn to make specific sounds.

Saxon is a prolific writer with passion for the unusual. I believe the bizarre world is always exciting so keeping you up to date with such stories is my pleasure
Previous Leopard, Cat Fall Into Well During Chase. See What Happened Next (Viral video)
Next Boy Cuts Inauguration Ribbon Before Turkish President