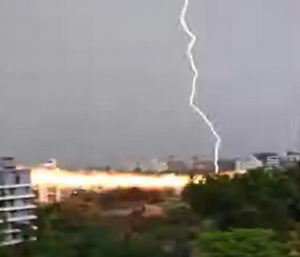 The frightening video of a lightning strike, captured from a high-rise building in Kolhapur, Maharashtra, is now going viral on the Internet. It showed a massive bolt hitting the surface around 200 metres from the person recording the event. The strike was so intense that it sent smoke rising into the air. For a moment, it appeared that there was a blast involving a large amount of explosives. A number of extremely loud claps of thunder followed. Rakesh Raut, who filmed the video from his residence, then closed the glass window.

In the caption of the video shared by ViralHog on Tuesday, Mr Raut said he was taking a nap after a heavy lunch but was woken up by the stormy weather. After hearing a few loud claps of thunder close to his apartment, he looked outside the window. “I got my mobile camera and began recording because a few bolts of lightning were striking very close by, but not striking the surface,” he said.

Around the 18th second of the 49-second video, we can see the lightning strike. A few seconds later, we see a flock of birds flying away to safety.

The video has got more than 4,655 views so far. The incident occurred on May 4, 2021, in Kolhapur, but the video went viral on YouTube recently.

Mr Raut kept rolling the camera and, ultimately, he was able to record a bolt striking the surface, near an electricity supply line. Though it hit the ground 200 metres from him, Mr Raut said it appeared “very close”.

“The intensity of the flash from the lightning strike was so extreme it made me feel like the strike was actually very close to my window, which shook me up a bit, followed by the extremely loud clap of thunder,” said Mr Raut.

Saxon is a prolific writer with passion for the unusual. I believe the bizarre world is always exciting so keeping you up to date with such stories is my pleasure
Previous Powerful Tornado Flips Truck In Terrifying Video
Next Man Jailed For Repeatedly Calling 911 To Tell Them He Was ‘Tired’