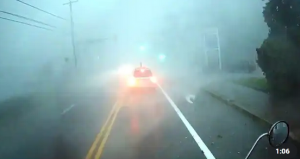 Hair-raising footage shows the moment a powerful tornado flipped a truck over to its side in Pennsylvania, USA, earlier this month. The video was captured during an EF-2 tornado that hit the area of Upper Dublin and Horsham Pennsylvania September 1. According to ABC News, wind speeds in the area reached 130 mph during the storm.

The video was recorded by the dashboard camera inside the tractor-trailer. It shows near-zero visibility outside, with trees swaying wildly amid strong winds. As the winds picked up speed, the truck was seen flipping over to its side and crashing on the road.

The video was shared on YouTube by Karl Beyer, who luckily escaped the accident with only minor injuries – thanks in large part to the seat belt he was wearing. He urged others to take tornado warnings seriously, writing: “Tractor trailer gets turned on its side by tornado in Horsham, Pennsylvania. Please take tornado warnings seriously even if you are not in tornado alley.”

Mr Beyer further said he was helped out of his truck by the man driving the van in front of him.

“That was terrifying. Absolutely terrifying,” wrote one person in the comments section, describing it as the “scariest storm” they had ever witnessed.

“I live near here. The devastation is heartbreaking,” another said.

At EF2 intensity, tornadoes can cause serious damage. EF2 tornadoes are capable of completely destroying mobile homes, uprooting trees and lifting vehicles off the ground.

Saxon is a prolific writer with passion for the unusual. I believe the bizarre world is always exciting so keeping you up to date with such stories is my pleasure
Previous Wild Bears Seen Playing Football In India (Video)
Next Man Films Intense Lightning Strike In Maharashtra