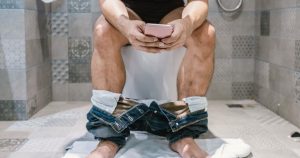 Researchers have developed technology that can recognise who is using the toilet based on their bum alone.

A camera inside the toilet bowl then matches the poop to the toilet user, who can see data on their waste.

It can even calculate “the flow rate and volume of urine, using computer vision as a uroflowmeter,” reports Futurism.

Smart toilets are growing in popularity – and some can even be life-saving.

Technology that scans faeces can identify chronic diseases and bowel cancer early to warn the sufferer.

t could help with conditions such as irritable bowel syndrome (IBS) and inflammatory bowel disease (IBD).

Another company competing in the smart toilet market, called Toi Labs, even records how toilet users sit on the seat.

It also examines the volume, clarity, consistency and colour of the poop.

“It’s capable of documenting those patterns and providing reports that can be used by physicians to help in the treatment of a variety of conditions.”

But as most people don’t like a camera pointing up their bottom, the scheme has raised a few concerns.

Some people worry the data could reveal personal information – such as private medical conditions and the use of drugs.

And if health insurance companies could access the data, they could change the price of medical care based on smart toilet data.

But the scientists say all the information collected will be private and kept in an encrypted cloud server.

Saxon is a prolific writer with passion for the unusual. I believe the bizarre world is always exciting so keeping you up to date with such stories is my pleasure
Previous Zoo Visitors Shocked To See Gorillas Suddenly Engage In Oral Sex (Photos, Video)
Next Snake Hitches Ride On Car Windscreen (video)