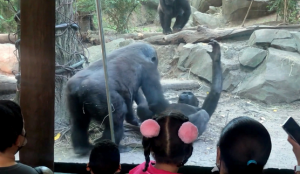 Social media users are still stunned over a video taken at New York City’s Bronx Zoo that shows one gorilla performing oral sex on another.

The video, which was filmed Wednesday, shows one gorilla lying on its back as another pleasures it. 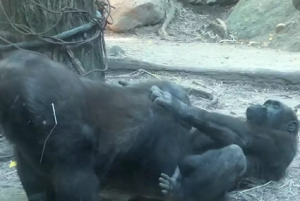 The videographer behind the clip told the New York Post that he was visiting the gorilla exhibit with his 4-year-old daughter and his niece.

“My wife had to stay out of the exhibit with my sleeping son, so I wanted to capture a lot of video,” said the man, who was not named in the Post’s story. “Then this magic happened.”

Video posted by TMZ shows parents quickly moving to hide their kids’ eyes from the amorous apes. (Watch it below.)

HuffPost reached out to the Bronx Zoo, but did not immediately receive a response.

However, the Post notes that seven years ago, a Reddit user posted a pic of two other gorillas pleasuring each other at the same zoo.

A 2014 BBC article points out that fruit bats, goats, brown bears, hyenas and lions have all been observed engaging in oral sex.

Naturally, Wednesday’s video aroused all sorts of comments from Twitter users, including rapper and actor Ice-T.