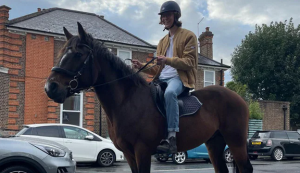 There is an unprecedented demand for petrol by British stations which are still seeing serious scarcity with more than two thousand pumps still dry on Thursday amid the country’s fuel crisis, according to news agency Reuters.

In a chaotic week where fights broke out at gas stations and people filled up old water bottles with petrol, one man was filmed riding up to a petrol station on a horse. Gus Lee-Dolphin found an old-school solution to the fuel crisis and turned heads as he rode up to a Shell petrol pump on horseback in west London, reports the Independent.

Footage that has gone viral online shows the prankster riding a chestnut horse to mock drivers waiting in long queues to get fuel.

The video, which Gus shared on Instagram yesterday, went viral after it was reposted by a popular Instagram meme page.

The video has collected over 1.7 million views and hundreds of amused comments on Instagram. It has also gone viral on TikTok with over 5 million views.

“How much horse power he got?” one Instagram user asked.

“Brexit is the best entertainment I have seen in years,” said another.

Saxon is a prolific writer with passion for the unusual. I believe the bizarre world is always exciting so keeping you up to date with such stories is my pleasure
Previous Snake Hitches Ride On Car Windscreen (video)
Next This Adorable Video Of Baby Monkey Riding A Goat Has Gone Viral