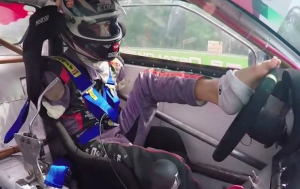 This young man is making history against odds and his story has become a trending inspirational piece on the internet.

He lost both arms in a tragic accident but this did not stop this motorsports enthusiast to strive to pursue his passion by using his feet to drive cars and even competing against able-bodied drivers in drifting competitions.

Bartek Ostalowski lost both his arms in a motorcycle accident in 2006, but that wasn’t enough to kill his dream of one day becoming a professional racecar driver. Finding himself armless at just 20-years-old and faced with the daunting task of learning to drive a car on a race circuit must have been quite the shock for Bartek, but he mustered the courage and the drive to push on, and in three years time he became a master of maneuvering a racecar with his feet. Today, Bartek Ostalowski is the world’s only professional sport driver who drives using his feet.

In order to deal with his physical limitations, Bartek modified his Nissan Skyline GT-R racecar according to his needs, adding a new engine, an independent gearbox, and stronger transmission. The ambitious Polish driver uses his right foot to control the pedals, while steering with his left one. The automatic is controlled with the shoulder.

“After my accident, I was looking for a solution. I asked myself if I wanted to race again what would I need to do?” Bartek told Business Insider. “I heard about someone in Poland who, like me, had no arms, but he drove a car on a daily basis with no problem. After meeting him, my dream and passion for motorsports were alive and strong, and I made the decision to return to racing one day.”

After making a name for himself on the Polish racing circuit, Bartek Ostalowski took on an even bigger challenge, drift racing. If you’re even the least bit familiar with drifting, you probably know how difficult it is, requiring quick reactions and precise hand-eye coordination in order to control the car as it skids around the track. Well, somehow Barek is able to do that using only his feet.

Saxon is a prolific writer with passion for the unusual. I believe the bizarre world is always exciting so keeping you up to date with such stories is my pleasure
Previous Air India Plane Gets Stuck Under Bridge Near Delhi Airport (Viral Video)
Next Viral Video: Woman Catches Baseball In Her Prosthetic Leg During Chicago White Sox Game