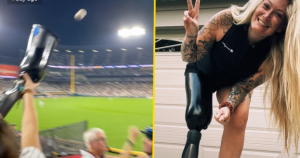 A woman has used her prosthetic leg to catch a baseball at a Chicago White Sox game in the US the other day. Check the video below out, it’s absolutely incredible.

This woman did not just manage to grab the baseball in her prosthetic leg, she did it at a match in the biggest baseball league in the world, after having consumed at least five beers.

In a piece of remarkable skill and quick-thinking, 27-year-old Shannon Frendreis grabbed her right leg off and managed to hold it up as the ball perfectly dropped into it.

To make matters even more impressive, she was presumably half cut, having had quite a bit to drink beforehand.

It’s a once-in-a-lifetime grab, that’s for sure.

She shared the moment on TikTok, captioning the video: “Five beers in, and taking my leg off to catch a ball seemed like a great idea.” 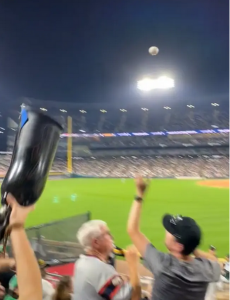 Naturally, people who have watched the video are raving about it.

One person said: “How did that not make ESPN’s highlight reel?”

Saxon is a prolific writer with passion for the unusual. I believe the bizarre world is always exciting so keeping you up to date with such stories is my pleasure
Previous Meet Bartek Ostalowski, The World’d Only Armless Professional Sports Driver (Video)
Next Watch: TV Host Allows Son, 2, To Get Dangerously Close To Giant Snake