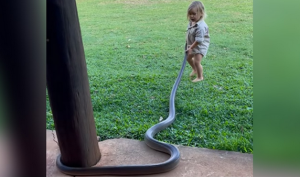 An Australian TV host, known for daredevilry and risking his life to relocate animals on his show, is finding himself at the receiving end of criticism for letting his son, a toddler, handle a giant snake. After a video of the incident he shared on Instagram went viral, Matt Wright has been severely criticised online for jeopardizing his son’s safety. The hair-raising clip shows the toddler holding the snake by its tail. The kid tried to pull the reptile into the field but could not bear its weight. Realising that he was doing something dangerous, he soon ran towards his father crying for help.

“Oh no, oh no, oh no,” the two-year-old Banjo cried as he dropped the tail. Then he came dangerously close to the snake’s head and Wright had to pull him away. “Come back, come back. He’s gonna bite,” says Wright and directs him – again – towards the tail.

“Grab the tail. There you go, grab the tail. Two hands, two hands,” the presenter of the National Geographic show Outback Wrangler tells his son.

Many people who commented on  the viral video expressed their disapproval.

Saxon is a prolific writer with passion for the unusual. I believe the bizarre world is always exciting so keeping you up to date with such stories is my pleasure
Previous Viral Video: Woman Catches Baseball In Her Prosthetic Leg During Chicago White Sox Game
Next Tiger Used In Gender Reveal Party Sparks Outrage (Viral Video)