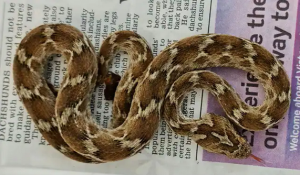 A highly venomous snake made a long journey from India to England recently. The venomous saw-scaled viper got stowed away to foreign lands in a shipping container from India. Staff from a British animal hospital were called in to capture the snake. But they had to take immense precautions while handling it. South Essex Wildlife Hospital, England, in a Facebook post, has spoken about this incident.

According to the hospital, they received a call to capture a stowaway snake that was found in a shipping container from India. According to BBC, the snake was found by a stonemason in a shipping container of rocks. The hospital sent its team that consisted of a reptile expert and a veterinarian. The team at once recognised that the reptile was a non-native species in England. The Facebook post read, “In addition to many British wildlife species coming in today, we also had a call about a critter that is definitely not in the country it should have been.”

The team understood that it was among the most venomous snakes in the world. “As it was identified as a saw-scaled viper and having had one before, we understood fully the gravity of just how dangerous these reptiles are,” the hospital added. The post also gave more information about the snake species. It added, “They are way up there in the top few most deadly snakes (it is believed to have killed more people than all the other species combined).”

Saxon is a prolific writer with passion for the unusual. I believe the bizarre world is always exciting so keeping you up to date with such stories is my pleasure
Previous Truck Loaded With Vehicles Gets Hit By High-Speed Train (Watch)
Next Toddler Takes Airport Security’s Nod Before Saying Goodbye To Aunt (Viral video)