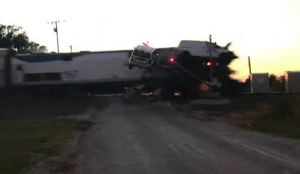 In a spine-chilling accident, an Amtrak train hit a semi-truck loaded with cars. The incident took place in Thackerville, Oklahoma, USA, on Friday. Hair-raising footage of the crash a truck carrying cars stuck at a railroad crossing. The vehicle is high-centred on the railway tracks. It couldn’t cross the track due to the heavy load. After looking closely, we also noticed a man, trying to give a signal to the locomotive driver. But, this act didn’t work and the semi-truck and cars are blown away due to the crash.

The YouTube caption read, “Semi got high centred on railroad tracks right before Amtrak was due to come through.”

As per an update shared by Love County firefighters on Facebook, five passengers aboard the Amtrak train sustained injures and were moved to a hospital. “The front of the train locomotive derailed, causing slight damage to parts of the rail bed and preventing the train from being moved.  Inspectors from BNSF, Amtrak, and the Federal Railroad Administration arrived on the scene to assist with command and inspect the damage to the tracks and train, the department added.

Saxon is a prolific writer with passion for the unusual. I believe the bizarre world is always exciting so keeping you up to date with such stories is my pleasure
Previous Watch: A Girl’s Excited Reaction After Seeing Pilot Dad On The Same Flight
Next Deadly Viper Travels From India To UK Hidden In Container Of Rocks