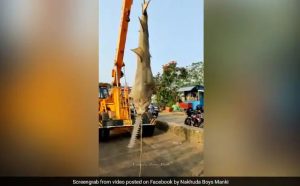 A video has surfaced online showing a rare sawfish which was netted by fishermen in Karnataka’s Malpe, India.

A sawfish or a carpenter shark is a critically endangered species, protected under Schedule 1 of the Wildlife (Protection) Act 1972. According to The New Indian Express, the 10-foot sawfish was brought to the coast by deep sea fishermen with the help of a crane. Footage of the huge fish being carried in the crane was widely shared on social media over the weekend.

The footage also shows people crowding at the harbour to catch a glimpse of the carpenter shark.

The sawfish, which weighed about 250 kilograms, was caught by fishermen in the deep sea fishing boat ‘Sea Captain’. It was reportedly sold to a Mangaluru trader after being brought to the Malpe fisheries harbour. However, auctioning off an endangered and protected species may land the fishermen in trouble. It could attract the same punishment as the killing of a tiger.

The joint director of fisheries department, Ganesh K, confirmed that a probe has been initiated into the incident, the Times of India reported.

An extremely rare & endangered species of carpenter shark (sawfish) was caught in fishnets at Malpe on Thursday. 🦈

The huge carpenter shark weighed around 250 kgs, was accidentally trapped in the nets of a boat named 'Sea Captain' that had left Malpe port to fish in deep waters pic.twitter.com/3AimndOv1I

A Twitter account called Mangalore City shared more visuals of the sawfish. “Carpenter sharks are an endangered species with their population has been on a decline,” they wrote, quoting experts.

Saxon is a prolific writer with passion for the unusual. I believe the bizarre world is always exciting so keeping you up to date with such stories is my pleasure
Previous Watch moment woman walked into pizza restaurant in South Africa and used sanitizer to wash her private parts
Next Watch! Karnataka Man’s Stunt With 3 Cobras Ends Badly