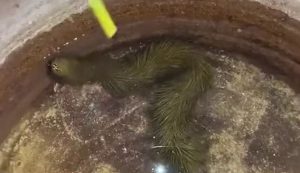 No one had seen this kind of snake before now so the locals were stunned as it surfaced from nowhere.

Locals in Thailand were shocked after a creature which observers described as a furry green snake was found in a swamp.

The furry snake was found in the Sakhon Nakhon province of Northeast Thailand by a local man named Tu, reports news website Thaiger. The 49-year-old man spotted the creature while walking home late last month and carried it back in a jar to show it to his equally-confused family members.

The family kept two-feet-long snake in a container filled with water and fed it small fish while they waited for authorities to identify it.

“I have never seen a snake that looked like this before. My family and I thought it would be useful to let people find out what it is and research about it,” Tu’s niece Waraporn Panyasarn, 30, was quoted as saying by Yahoo News. Ms Panyasarn took some photos and videos of the snake which she posted online, asking for help in identifying it.

Users of Facebook compared the creature to a dragon, while some suggested that it could be a snake with moss or algae growing on its back.

Sam Chatfield, who is snake species coordinator at Wildlife ARC, an organisation that rescues and cares for injured animals, agreed that the creature could be a puff-faced water snake with algae growing on its scales.

“The scales are on top of skin and mostly made of keratin. It’s like having a layer on top of the skin and when they shed they’re shedding the outside of those scales,” she said.

“Next time it sheds it (the algae layer) will come off.”

Saxon is a prolific writer with passion for the unusual. I believe the bizarre world is always exciting so keeping you up to date with such stories is my pleasure
Previous Indian man commits suicide with his 11-year-old daughter months after wife took her own life
Next Watch! Dancing Man Stabs Himself During Stunt At Holi Celebrations in India