Watch! Dancing Man Stabs Himself During Stunt At Holi Celebrations in India 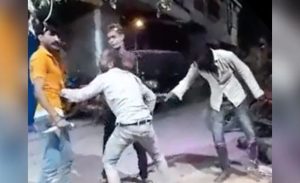 This was not the original plan but the stunts planned by this man who was actually drunk at that time ended up giving him one of the most shocking experiences of his life.

A 38-year-old man, on Thursday, accidentally stabbed himself while enacting a stunt during Holi celebrations in the Banganga area of Madhya Pradesh’s Indore in Indai.

Police said Gopal Solanki, who was dancing with his friends and had a knife in his hands, accidentally stabbed himself when he tried to enact a stunt.

A man succumbed to injuries in Indore, he was dancing with a knife in his hand during holi celebrations stabbed himself, he was taken to a hospital where the doctors declared him dead @ndtv @ndtvindia pic.twitter.com/7tbGC9T9BB

Footage of the incident which surfaced online shows a heavily drunk Gopal dancing with his friends around the Holi Pyre. He can then be seen stabbing himself four times with the knife in an attempt to recreate a stunt sequence.

Mr Solanki’s friends and family members rushed him to Shri Aurobindo Institute of Medical Sciences where the doctors declared him dead, officials added.

Saxon is a prolific writer with passion for the unusual. I believe the bizarre world is always exciting so keeping you up to date with such stories is my pleasure
Previous Locals Stunned by Mysterious ‘Furry Green Snake’ Found In Thailand Swamp (Video)
Next Florida Man Calls Police To ‘Check Whether His Meth Is Authentic’