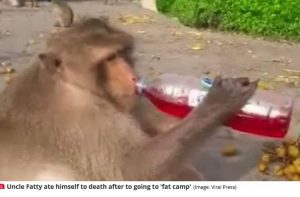 This monkey became an internet sensation due to his insatiable hunger that made him a mascot and beloved role model for millions.

Pictures of his incredibly chunky figure appeared in newspapers and social media across the globe as his popularity grew.

Sadly, this monkey eventually died though it is not clear whether he died of old age or due to gluttony.

Wildlife officials were reportedly stunned when they first laid their eyes on the long-tailed macaque, who had ballooned a whopping 15kg (2.3 stone). 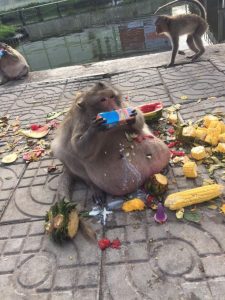 The cheeky primate had developed a sharp appetite for melons, milkshakes, sweetcorn and noodles after they were regularly handed to him by visitors to a floating market in Bangkok, Thailand.

After being taken for a health check by the National Parks, Wildlife and Plant Conservation authority, he was then admitted to a monkey ‘fat camp’ at the Nakhon Nayok wildlife rescue centre in May 2017.

Workers there said they hoped to bring Uncle’s weight down to the species’ average adult weight of 8kg before releasing him, but many were sad to see him off the streets — including his pack, who reportedly fought with workers to stop him from being taken away. 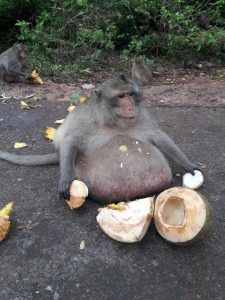 At the time Thai primate conservation group ‘Monkey Lovers’ said they wanted him returned to his friends as soon as possible because he was “not sick” and was a “leader to the younger monkeys” in the area.

His stint in rehab reportedly went well after he lost around two kilos, with Natanon Panpetch, with a vet at the Wildlife Conservation Office commenting that August: “His tummy no longer drags on the ground. He is in perfect health and ready to be released. He has grown accustomed to the natural foods”

Sadly, what happened next to our favourite morbidly obese beast next remains a mystery.

Following a reported relapse later in the year, monkey specialists noted him as presumed dead after going missing from his pack for five months.

Experts remain split on whether he died of old age, or from doing what he loved — feasting on all the finest junk food the city streets had to offer.

Saxon is a prolific writer with passion for the unusual. I believe the bizarre world is always exciting so keeping you up to date with such stories is my pleasure
Previous Florida Man Calls Police To ‘Check Whether His Meth Is Authentic’
Next Watch! Brave Pigs Fight Off Black Bear That Climbed Into Their Enclosure (Viral Video)