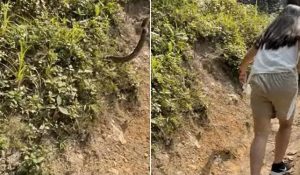 This was definitely not part of the initial plan but the hikers enjoyed recording the scary experience which has made them to go viral.

Some hikers recently had an encounter of a lifetime as they walked through a hilly stretch in Thailand.

As they moved along a narrow walkway, a large snake jumped on one of them. They were lucky it did not bite.

A video of the harrowing incident has gone viral. It showed a woman walking ahead and another person recording her ascent. Not anticipating a slithery surprise, they appeared to be enjoying the hike. Suddenly, a large snake appeared out of the bushes alongside the rocky stretch and jumped on the person who was behind the lens.

The frightened hikers screamed and ran to safety as the camera went out of focus. The incident happened in Chiang Rai, a mountainous province in northern Thailand, on March 20. And, the video was shared by ViralHog on YouTube the next day.

“A rat snake surprises people on a hike,” reads the caption.

Rat snakes are non-venomous and they kill by constriction. They do not pose a threat to humans. As their name implies, rats are their favourite food. However, it is difficult for most people to distinguish between a venomous snake and a rat snake when one is lunging towards them menacingly. And, people often prefer to run in such circumstances.

A user, too, suggested that people should run the moment they come across a snake. “Run save yourself, don’t stop running, never look back,” the person wrote.

But another felt that the hikers reacted late to the snake attack.

Recently, a mysterious furry green snake was found in a swamp in northeast Thailand, baffling locals and animal experts. A man saw it first and he kept it in a glass container filled with water. The family fed the snake small fish. A snake species coordinator said that the snake could have grown algae on its scales.

Saxon is a prolific writer with passion for the unusual. I believe the bizarre world is always exciting so keeping you up to date with such stories is my pleasure
Previous Huge man fights off officers and flings one into gutter after they stopped him and tried to force him out of his car (video)
Next Watch As Maharashtra Cop Jumps Onto Railway Tracks To Save Teen