Watch As Maharashtra Cop Jumps Onto Railway Tracks To Save Teen 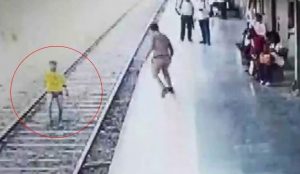 A young boy is alive today because of the agility of a policeman and this has excited the social media.

The social media is ailing an alert policeman as a hero for saving the life of a teenager who jumped onto the railway tracks as a train approached.

The incident occurred at Vitthalwadi railway station in Thane district of Maharashtra, India, on March 23, around 2.30 pm. CCTV footage of the incident shows the policeman risking his life to save the teenage boy from being run over.

Shared by news agency ANI, the 33-second footage shows the teen, in a yellow shirt, standing on the edge of the platform. The policeman, too, is seen walking nearby. However, the teen seems to spot an approaching train, and jumps on the tracks. After losing his balance momentarily, he stands up and puts his hands back while facing the incoming train.

The policeman notices this and runs towards the railway tracks. Once near the edge of the platform, he hesitates for a split second, seeing the train arriving, but then jumps onto the tracks. He catches hold of the teen and pushes him to the other side of the tracks. Within seconds, the train passes the very spot where the teen was standing.

ANI captioned the post, “Maharashtra: A police personnel saved a teenage boy’s life by pushing him away from the railway track just seconds before an express train crossed the spot at Vitthalwadi railway station in Thane district.”

Saxon is a prolific writer with passion for the unusual. I believe the bizarre world is always exciting so keeping you up to date with such stories is my pleasure
Previous Scared Hikers Scream As Large Snake Lunges At Them In Spine-Chilling Video
Next Watch terrifying moment woman was severely mauled by her pet pit bull in elevator (Graphic video)