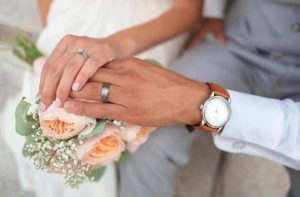 A Japanese couple had to adopt a strange option after they could not agree on their last name.

They agreed to divorce and remarry every three years in order to take turns using their respective last names.

Japanese law says that couples must agree on a single last name to use after they get married. The bug question is what happens when two lovers just can’t decide which one of their family names to use?

It is in response to this question that a young couple from Hachioji city, on the outskirts of Tokyo, who decided to tie the knot, after a few months of dating, opted to divorce and remarry after three years.

By the time it came to settling on their last name, she made it clear that she intended to keep her maiden name, something that her husband didn’t agree with at all. They argued about it for a while, but then they decided that they weren’t the first couple to have this problem and that there was a way to solve it.

“My husband (who was still her boyfriend at the time) thought women should take their husband’s last name. I didn’t agree with that, so we argued,” the woman, an office worker, recently told the Japanese newspaper Mainichi.

The wife-to-be was very frustrated about not being able to keep her maiden name, and her fiancee complained about it to some friends. That’s when he found out about another couple with the same problem who had managed to fix it by divorcing periodically and getting remarried under the other partner’s last name. Which is exactly what they decided to do.

After the man, who works as a civil servant, presented the solution to his fiancee, they decided to go through with it. In 2016, they got married for the first time and used his last name for three years. Then, in 2019, they divorced and then remarried, using the wife’s maiden name. This July, they are scheduled for another divorce, after which they plan to remarry using the husband’s family name.

But while this compromise solves their original disagreement, the Japanese couple, who preferred to remain anonymous, both admit that periodically changing their last name is somewhat problematic. The husband still goes by his family name at work, but when it comes to procedures and paperwork, it can get confusing.

“I always had to remind myself that I was carrying my wife’s last name,” the man said.

As complicated as the arrangement may seem to other people, the couple said that it was the only acceptable solution for them. The only other alternative they knew of was going abroad and getting married with their respective family names, before returning home and asking a Japanese court to recognize their marital status despite their different names. They apparently thought their way was simpler.

Saxon is a prolific writer with passion for the unusual. I believe the bizarre world is always exciting so keeping you up to date with such stories is my pleasure
Previous Watch Scary Video: Dust Devil Smashes Paraglider Against Fence
Next “I can hardly keep up with her” – 35-year-old Kenyan man praises s3xual prowess of his 70-year-old American wife